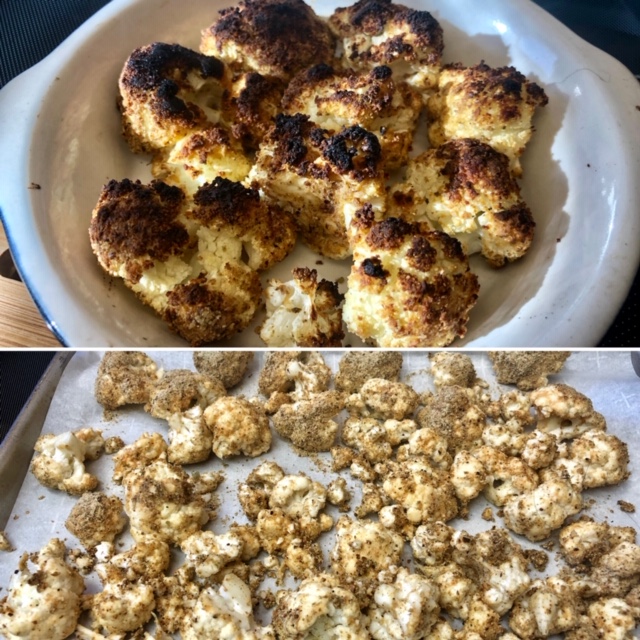 I haven’t written for a few weeks; I suppose the news is finally getting to me. I am at a loss as to why our elected officials cannot find a way to make it safer when it comes to background checks for purchasing a gun or firearm. Over 70% of Americans are just as tired as I am of mass shootings. Enough is enough.

I needed a pick me up, and I remembered that cooking is my special chill pill, so I went to the store and bought cauliflower. Now what? I looked in my kitchen for a few other ingredients and came up with a cauliflower bite recipe that was vegan. Just to find out how it would taste.

I used miso for the binder and added other ingredients with little or no sodium since miso can be a bit on the salty side. I roasted the cauliflower and finished them off with a broil to brown them a bit more. We used Cardini’s Caesar salad dressing as our dip.

Toast the pumpkin seeds in a cast iron skillet until the nuts just begin to pop. Let cool and process fine in a small food processor. Set aside.

Break up cauliflower head and place flowerets in a large bowl. Add the paste mixture to the bowl and mix well so that the paste evenly covers the cauliflower. I used my hands because it was simply easier.

Roll the flowerets in the processed pepitas and set on baking sheet. Roast the cauliflower for about 20 minutes or until they begin to brown. You can always set the oven to broil if you want them a bit browner or crispier!