It’s somehow astonishing to think that this Fall it will be two years since Paul died. It took me almost a year to use the word “died” instead of “passing”. The first year I learned that he did not pass but that he died and it was all so very final. And at the same time, I have not been able to feel complete again until just this summer.

I must admit, my dog’s diagnosis of congestive heart failure woke me up to getting up out of that funk and getting on again. A bucket list that was truly part me, part Zeke was written and checked off over the summer. One item on the list was to plant a larger garden for client gifts from my seasonal harvest. Ok, some friends are the recipients of such gifts, too! You know who you are…. 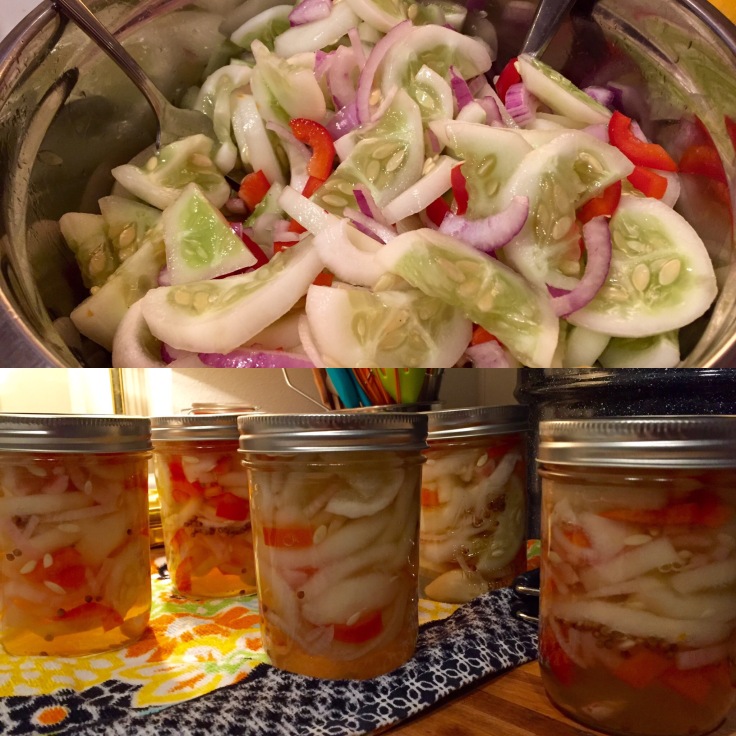 Going with this larger garden came the experimentation of planting vegetables I had not grown in the past besides my precious tomatoes. Lettuce. Arugula. Peppers. Squash. And, Lemon Cucumbers. Ok, so I like lemon flavored anything and everything. But what to do with these beauties once they started ripening? All of the sudden, I had at least five pounds!

I prefer rice vinegar and was not able to find a recipe that was simple. Most of the recipes had just too many flavors going on. I did not want to lose that hint of lemon. I came up with a simpler version, and chose ingredients that would complement the lemon cucumbers. Enjoy!

2 pounds of lemon cucumbers
1 red bell pepper
1 medium red onion
1 tbsp sea salt
1 clove garlic for each jar, peeled
¼ tsp mustard seeds for each jar
1 tbsp raw sugar
3-4 cups natural rice vinegar
This should fill 6 pint jars, sterilized according to canning instructions
If you are not going to water bath can the jars, then use or gift within a week or two and keep them refrigerated

Clean and peel the cucumbers before thinly slicing horizontally
Peel onion, cut in half, then in quarters and slice thinly
Cut red bell pepper in quarters, then each quarter in half and slice thinly
Toss all ingredients in a large bowl with salt and let it sit 30 minutes
Combine sugar and rice vinegar over low heat, stirring until sugar is completely dissolved
Place a garlic clove and ¼ teaspoon mustard seed in each jar
Fill each jar with the cucumber mixture, compressing evenly
Pour rice vinegar mixture in each jar, cover with lids and bands
I used a water bath canning pot for 10-15 minutes, it depends on your altitude

NOTE: for a spicer flavor, substitute mustard for coriander seeds and finely mince a jalapeño (discard seeds & membrane), divide evenly in each jar

One thought on “Life’s Lemons are Cucumbers #PickledLemonCucumbers”